Why Do Cats Eat Flies? Every once in a while, our cats might amaze us (or disgust us) by what they find to be a tasty treat. But why do cats eat flies, especially considering how small of a meal they’d provide?

Cats eat flies because of their natural instinct to hunt and play. Cats are predatory animals that will attempt to hunt down anything smaller than themselves once it’s instinctively excited. The cat’s age will determine whether it’s hunting or playing the fly.

Flies are not the only victims of a cat’s willingness to hunt. Any insect that appears attainable and behaves sporadically will become fair game.

Whether it crawls, hops, or flies, quick, jerky behavior will grab the cat’s attention and shift the cat’s gear into play or hunt mode.

Table of Contents 👉 SHOW 👈
Is a Cat Playing or Hunting when Chasing Flies?
Is it Bad for a Cat to Eat Flies?
Cats are Hunting Machines
Final Thoughts

Is a Cat Playing or Hunting when Chasing Flies?

In the world of cats, playing and hunting are only distinguished by the end result.

When a Cat is Playing In other words, if it’s playing with a housefly, it’ll go all over the place to chase and hunt down the fly. After the fly is caught, the cat will then let it go, repeating the process till the fly either gets away for good or dies.

This same kind of playing can be seen when a cat catches a mouse in play. It will catch the mouse, bite it a little, then let it go in hopes of another chance to chase.

The result is the same as with the fly. If it gets away, it’ll live to see another day (if it’s able to survive any wounds from the cat’s claws or teeth). If it doesn’t get away, the cat will continue to play with it until it’s not fun anymore, which usually means the mouse is dead.

Sounds kind of severe, right? Playing with another living thing until it dies? Well, not to a cat. Cats play because clearly, the play is fun and a great way for the cat to expel some energy. But deep down, all play is hunting practice.

Have you ever watched two kittens go at it? They’ll take turns chasing each other through the house, and after one catches the other, they’ll latch on to each other, biting and clawing.

After a quick scuffle, they let each other go after it starts to hurt. Then the process repeats, often switching roles back and forth between hunter and prey.

Cats are incredibly tough and resilient animals, and kittens are no exception. They can dish out beating to each other in play that might alarm some owners. They are equipped well enough to dish out punishment in play and tough enough to take it.

On the other hand, insects or very small living targets are not.

When a Cat is Hunting 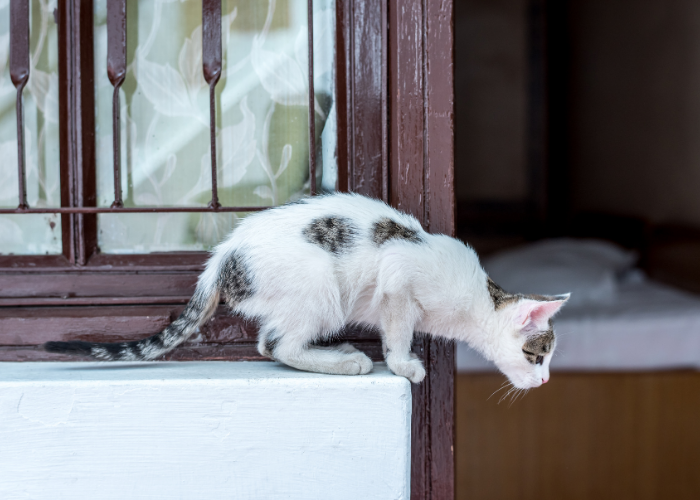 When cats or kittens kill in sport, death is merely a byproduct of the means. When hunting, the means justify the end. Though the actions may appear the same to us, their intentions are completely different.

The biggest difference in behavior between playing and hunting is at the end of the exercise- after the prey has been caught. Where a cat playing will eventually let the catch go to be able to chase it again, a cat that’s hunting will kill the prey as quickly as possible to eat it.

It’s tough to distinguish your cat’s intentions until the prey (in this case, a fly) has been caught. But until then, the cat will use the same amount of focus, stealth, vigor, or acrobatics while in pursuit.

Is it Bad for a Cat to Eat Flies? 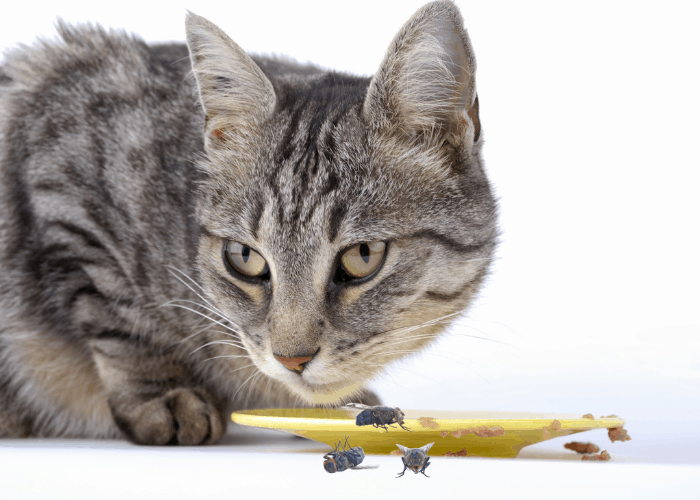 It isn’t typically bad for a cat if it eats flies. Adult cats have a strong system, capable of eating small prey whole, namely mice- fur, bones, and all. Regarding their digestive system, cats have zero problems digesting flies or most insects in general.

Even if your cat shows signs of having a sensitive system, the tiny amount of materials a fly provides won’t be enough to get the cat sick. Also, your cat is unlikely to eat a bunch of flies daily. One here, one there, won’t impact the health of an adult cat with a sensitive stomach.

Kittens are a Different Matter

Kittens are in danger of becoming sick by eating flies due to their unfinished and developing digestive system and an immune system that is not yet at its fullest.

After eating a fly, a kitten’s digestive system might full-on reject it, causing the kitten to suffer vomiting and stomach discomfort. If the kitten does digest it, its organs may not yet be able to do anything with the material, meaning that it will cause issues anywhere it goes until it’s passed completely through the kitten’s system.

A Kitten’s system is much different than that of an adult cat. Some things an adult might eat with no problem could kill a young adventurous kitten.

Different contents in human food come to mind, for example, spices in particular. When eaten by an adult cat, it might not have any issues but would cause severe issues (even death) if eaten by a kitten. They’re cute and cuddly, but if they were big enough, they’d kill you. Furthermore, they’d probably eat you as well. They are so tuned for hunting prey that playing is nearly an exact replica of the action, as discussed above.

These instinctual behaviors reach as far back as their ancestors roaming wild, fighting for survival.

The instinct to hunt is always present in a cat regardless of the size, breed, temperament, or upbringing. It’s in their makeup just as plainly as having four legs.

The only thing that has ever changed regarding our domesticated cats is the type of prey when they seek prey, and why. Cats chasing down small critters and eating them; a reality we get to witness whenever a cat has an opportunity to exercise this piece of its predatory instinct. 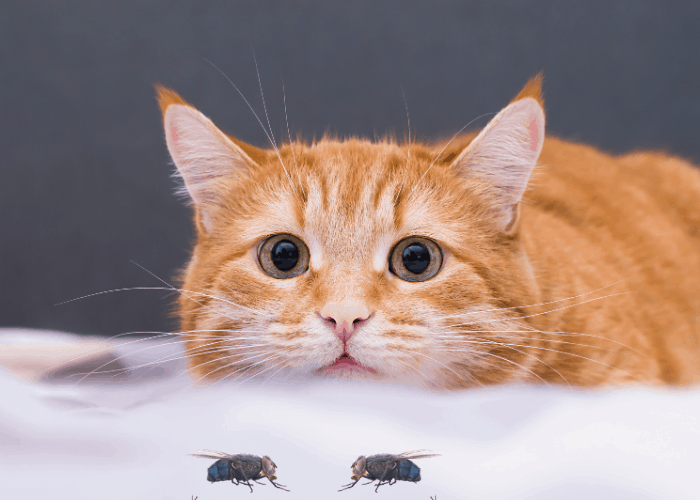 If you’ve spotted your cat eating a fly or have noticed that your cat has been chasing around a fly, the cat will be fine if the fly gets eaten. It’s perfectly normal cat behavior.

Sometimes humans are too smart for their own good. When we see a cat eat a fly, our first thoughts would be how gross it is or knowing too much about where that fly has been- particularly if previously spotted in or around the cat’s box!

We know enough to get concerned, wondering if the cat will be okay. But cats don’t suffer the burden of these thoughts, nor would they care if they did. They’re cats and will do what they do best whether we like it or not.

WORTH  A LOOK:  What Do You Call A Group Of Cats?