Why Do Cats Love Dirty Towels? Cats have all sorts of strange likes and dislikes, but why do cats love dirty towels?

It’s not uncommon to see our cats rolling around in, or even “nesting” in our dirty laundry, but why on earth do they do this?

To us, it seems strange, but in a cat’s world, this behavior is completely normal.

After a great deal of research, I have concluded that the reason for this behavior lays in a cat’s senses, as well as in its evolutionary history.

So why do cats love dirty towels?

The simple answer is that it smells like you. Cats have an extremely keen sense of smell.

With over 200 million scent receptors in their nasal cavity, cats have a sense of smell that is 14 times as strong as that of humans, and stronger than most breeds of dog. 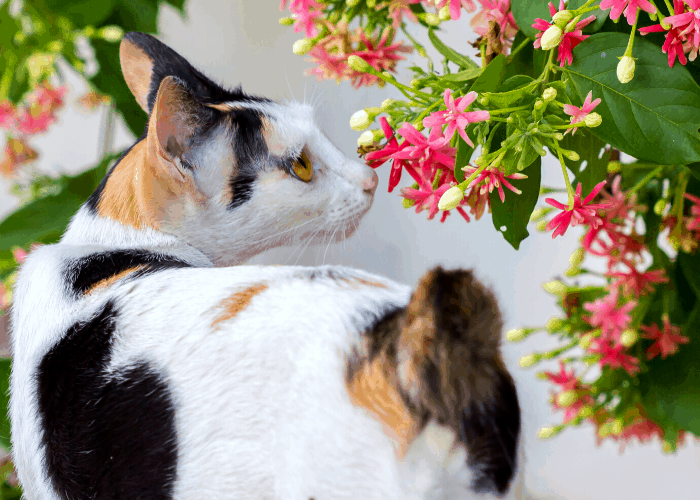 Cats use this sense of smell for a variety of things including seeking out prey, determining whether food is edible or poisonous, finding their way home if they get lost, and yes, even for finding their mother or owner.

As the cat’s owner, you have a very distinct smell, and when you use a towel, your scent becomes attached to that towel.

In return, the cat associates that towel with you. And if you are close with your cat, that means they also associate that towel (or your smell) with comfort.

Of course, the reasons why cats love dirty towels so much goes far deeper than that, and we will discuss the reasoning further as we continue on.

We’ll also discuss some similar topics and questions like, “is it safe for my cat to roll around in dirty clothes?” and “why does my cat hide my clothes?”

Let’s not waste any more time…

Why do Cats Love Dirty Towels? So we already addressed that cats love dirty towels because they smell like us, but why does this even matter to them?

Why does our scent attract our cats?

To answer this question, we have to dig into the history of cats.

Cats weren’t always domesticated. In fact, it is believed that before domestication, cats spent thousands of years living alongside (but not with) humans.

During this time, they needed certain things in order to ensure their survival; food, water, shelter, and safety were all of utmost importance to the pre-domesticated cat.

In order to signal these resources to one another, cats would communicate through scent marking.

Pheromones are a type of chemical produced by animals in order to trigger behaviours in animals in the same species. Cats use their pheromones to mark people, objects, and so forth to communicate messages to themselves or other cats.

So when cats lived without humans, they would use their pheromones to label resources as valuable, harmful, safe, or unsafe.

And though humans don’t participate in scent markings, cats don’t realize that. The truth is that cats don’t really have a deep understanding of humans or human behaviors.

Rather, they see us as giant cats. In return, they often think that we act in the same ways they do, and that we too engage in acts of scent marking.

So when you use a towel and leave behind your scent, you cat takes that as a message from you. The message? “This towel is safe”.

And given that cats are their most vulnerable when they sleep, it’s important that they find a “safe” place to rest.

This towel has now been deemed safe by the person that makes them feel safe, and thus they feel comforted enough to take a nice nap in your dirty towel.

And that’s why cats like to lay and roll around in our dirty towels and clothes.

Why Does My Cat Pee On My Dirty Towels? Unfortunately, cats don’t always just lay in our dirty towels and laundry – sometimes they pee on them too.

No, this isn’t a form of “marking their territory”. Though a cat may be expressing their anger with you by peeing on things that smell like you, chances are that there is another reason for this behavior.

Most often, this behaviour lays in the fact that something is wrong with their litter box.

If your cat is peeing on your dirty towels or laundry, you first want to make sure that their litter box is locatable.

If your cat can’t find their litterbox, they can’t use it. Period.

You also want to make sure the litterbox is clean. Cats are very cleanly animals, and they don’t like to use a dirty litterbox.

If this is the case, they may seek to urinate elsewhere. Cats may also pee on your belongings if you aren’t using the right type of litter. Cats react differently to different types of litter, so before assuming that something is wrong with your cat, try using a different type of litter to see if the problem clears.

Finally, if you can’t find anything wrong with the litterbox, and your cat doesn’t seem to be peeing out of spite, they could have a Urinary Tract Infection (UTI).

Take your cat to the vet immediately to rule out this concern, and chat with your vet about what might be causing these behavioural issues. Cats aren’t drawn purely to dirty laundry – sometimes they like clean laundry too.

There are two different explanations for this behaviour, and one is the exact opposite of which we just pointed out for dirty laundry.

If there is no scent on your clothing or dirty towel, it signals to a cat that it doesn’t yet have an owner. As soon as a cat has recognized that no one has claimed your treasures, they’ll waste no time in doing so for themselves.

The secondary explanation for why cats like clean laundry is simply because it’s warm.

To cats, the ideal body temperature is 100-degree Fahrenheit, which is well above room temperature.

So if your clothes have just come out of the dryer, or have been laying on top of a register, they’ll be likely to curl up in them to draw in the warmth.

Is It Safe For My Cat To Curl Up In My Dirty Laundry? In most cases, yes.

Cats aren’t affected by human sweat or odors, so in most cases it’s completely safe for your cat to curl up in your dirty clothes or towels.

The exception to this rule is if you have worked in an environment where toxins may have spilled on, or attached to, your clothes.

Things like paint, cleaning chemicals, and toxic plants can all be harmful to your cat if they roll around in them or digest them.

So if your clothing could have traces of harmful chemicals or toxins, keep them out of reach of your kitty. In summary, cats like our dirty towels and laundry because they remind them of us. As humans, our cats feel safe and protected by our presence. When we aren’t available to comfort them, the scent that we leave behind on our towels and clothes tell them “this is a safe place to lay”.

So as long as you are okay with a little kitty fur on your clothes, let them lay in peace.

How do cats release their pheromones?

There are actually several different ways that cats can disperse their pheromones:

Why does my cat hide my clothes?

As if it’s not enough for your cat to lay all over your clothes, sometimes they hide them too. If you have ever noticed a small piece of clothing like a pair of underwear, a sock, or a glove go missing, your cat may be the culprit. Why? Most often, this is an attention seeking behaviour. If your cat hides your clothes they are usually seeking attention, or want to play. In some situations, it may become a case of, “I want what I can’t have”.

In any situation, if you are bothered by the fact that your cat is hiding your clothes, it probably just means that you need to spend some more time playing with them. Cats are usually happy to play by themselves, but do seek play from their owners too. In general, you should give your cat 20 minutes of one-on-one time each day to keep them happy, content, and away from your socks.

Previous post: Why Do Cats Meow Back At You?